I didn’t really plan to buy this car. It was whilst I was working on my Variant conversion project that I heard about someone who had a 412LE fastback with only 22,800 miles on the clock and wanted it to go to a good home. So I arranged to go and see the car after work one evening and agreed to buy it. I took possession on 4th February 2000. 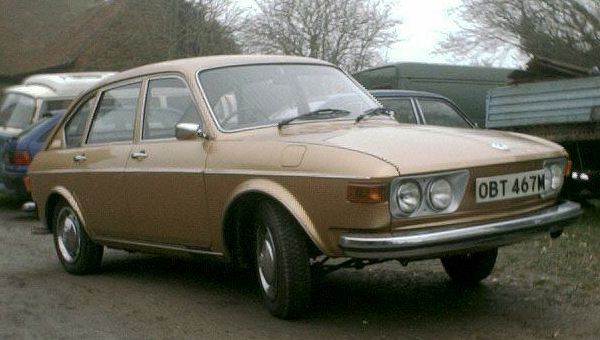 It had been stored in a lock-up garage for a while and the battery wasn’t holding its charge. After struggling for a few weeks, I discovered that the battery made frying noises when the starter motor was engaged, suggesting serious and terminal internal problems! A new battery transformed the car and all was well until the MOT which became due the following June. That resulted in a need for three new tyres and a fair bit of welding on the exhaust, the brakes also needed some attention.

I used it as my daily transport to work, some 22 miles of a round trip, for more than 5 years and it was a joy to drive. Unfortunately I couldn’t get the Eberspächer heater to work (although I have to admit that I didn’t try very hard) so winter mornings were a little trying! I had always intended to run the car until my conversion project was finished but that has been delayed for several reasons (such is life) and Goldie had to endure more winters on the road than were good for the bodywork. In November 2005 she failed her MOT in convincing style, the main problem being excessive corrosion around the rear subframe mountings. Nothing that a normal restoration project could not deal with but not something for a wet and cold weekend in November! So, after a shade under 40,000 miles in my possession, she has come to the end of the road for the time being. She was finally sold courtesy of eBay in November 2006, having decorated my drive for a year.